Stereotaxy in Laboratory Rodents: Helping you achieve the Gold Standard

The anaesthetised animal’s head is stabilised and fixed in a pre-defined position on a stereotaxic frame. Stereotaxic coordinates that correspond to a reference stereotaxic brain atlas are used to target a precise region of the brain. The bregma and lambda landmarks on the animal’s skull are used as anatomical markers for stereotaxic surgery.

Both rat and mouse brain atlases are available with accurate three-dimensional coordinates of brain structures and anatomical information for stereotaxy. Australian anatomist and neuroscientist Professors Charles Watson and George Paxinos first published “The Rat Brain in Stereotaxic Coordinates” in 1982.The Paxinos and Watson Rat Brain Atlas has become the most trusted source of accurate coordinates and anatomical information in laboratories throughout the world. It has been cited over 60,000 times, making it one of the most cited publications in neuroscience.

Stereotaxic intracranial injections can be used to introduce genetically-engineered viruses and/or to alter expression of a specific gene in a targeted brain area in rodents. Stereotaxic injection of lentivirus was used along with behavioural tests to study how genetic factors modulate mouse behaviour (McSweeney and Mao, 2015).

Stereotaxic surgery is used to implant probes in specific regions of the rodent brain for microdialysis studies. The implanted microdialysis probes are used for infusing substances into the brain or spinal cord and to collect dialysate containing substances such as neurotransmitters, peptides, hormones, electrolytes, drugs for subsequent analysis. “Accurate and reproducible implantation into the area to be sampled is crucial for micro-dialysis experiments. Stereotaxic coordinates, however, can differ depending upon the strain, age, and sex of an animal.” Zapata et al. (2009)

Gieger et al. (2008) demonstrated stereotaxic implantation of guide cannulas targeting specific sites in the rat brain and showed how to insert and implant a microdialysis probe. Stereotaxic surgeries allow placement of implants such as cannulae and sealed chambers for long term access to the rodent brain for injections and recordings.

Published by David Kopf Instruments, “Kopf Carrier” #95 provides a detailed methodology for the stereotaxic implantation of multiple screw electrodes, used for recording multichannel EEG data from the surface of an adult rat brain. Kopf Carrier #95 is available on request to all researchers:

There are a large field of choices when it comes to stereotaxic equipment. There are a small but growing number of manufacturers, each having a position in the market.

Stereotaxic devices from David Kopf Instruments are considered by many researchers as the most accurate and reliable choice for stereotaxic surgeries and are adaptable for use with a wide variety of small animals. The range includes modular accessories allowing for expansion of instrument capabilities, including additional/future applications. These instruments are easy to use, durable and provide precise and repeatable setup for stereotaxic surgeries.

The Model 940 Small Animal Stereotaxic Instrument with Digital Display Console permits accurate and reliable XYZ stereotaxic placement.  It comes with state-of-the-art digital linear positioning scales for ease in operation, saving time and enabling precision and consistency for you, the researcher.

This design ensures full range of motion, angulation and rotation of the stereotaxic manipulator.  Linear scales have 10-micron resolution for all axes and include an easy-to-read compact digital display console. The control feature allows “zero” reset at any position along the 80 mm travel distance.  The display includes slide switches that allow the end user to determine positive or negative number readings.  In addition, the traditional vernier scales are visible and can be utilized for gross movement.  The ear bars are in a fixed position.  When the animal is loaded in the frame the only adjustment required is essentially to raise or lower the tooth bar in order to level the head.

A new design feature – a detachable manipulator top assembly – is now included.  The manipulator top can be disconnected for ease in storing, cleaning and/or for returning to factory for service (if ever needed).

Linear encoders – designed and built by Kopf – give ultimate control over product quality and longevity.  Other systems use magnetic scales/encoders which may ultimately be less accurate and are subject to ingress (dirt, chemicals).  Kopf encoders/linear scales are fully protected and accurate. 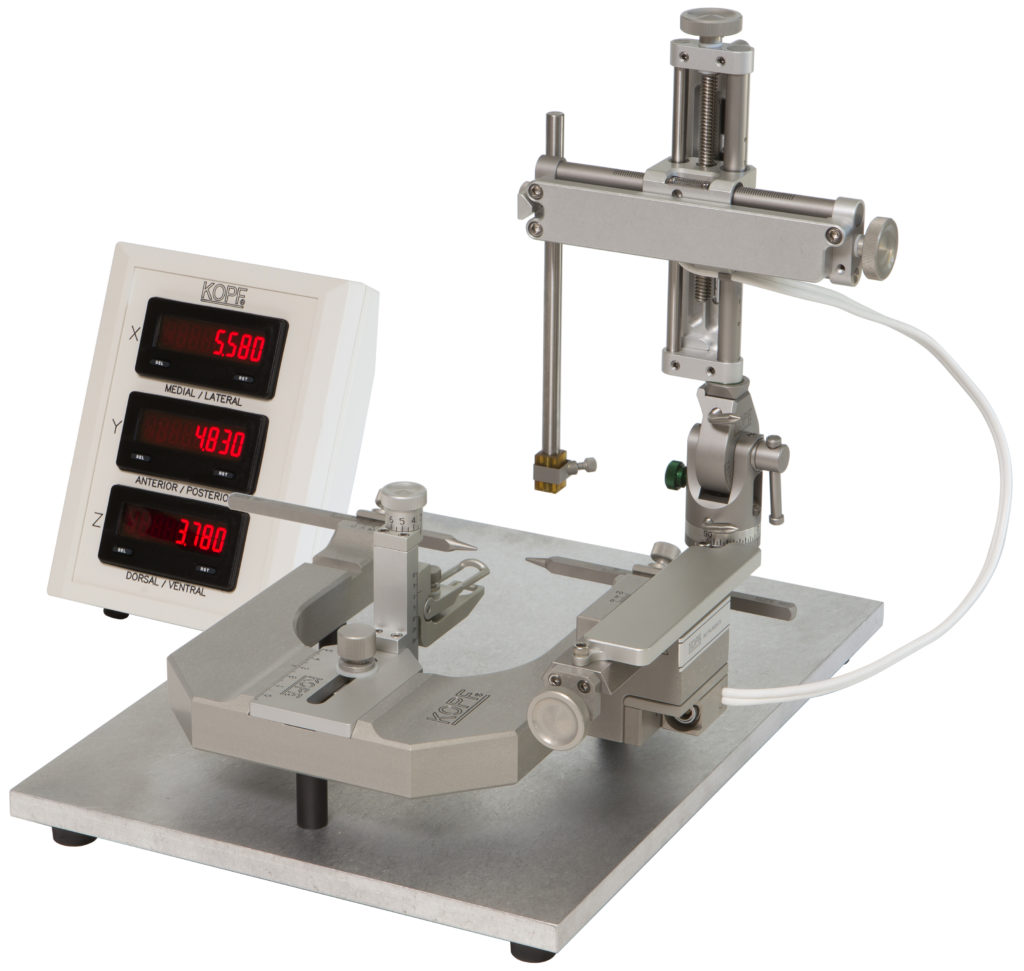 Several atlases in current use are based on dependable parameters of Kopf instrumentation. The precise way in which the stereotaxic instrument is manufactured delivers the accuracy, integrity and durability for which Kopf is synonymous.

Kopf Stereotaxic Instruments – considered by many as the “Gold Standard” in stereotaxic surgical equipment.